SOCIAL DISTANCING This will be a socially-distanced event, with singers spaced 1m+ apart. Please wear a face mask until you are seated in your place.

Join composer & conductor Matthew Coleridge for a glorious day of music-making in the striking modernist All Saints Church in the leafy Bristol suburb of Clifton. Spend the day learning Matthew's "exquisitely beautiful" REQUIEM, before singing in an atmospheric evening performance, conducted by the composer.

Matthew is a charismatic and engaging workshop leader, whose music has been known to reduce choirs to tears!

"A glorious piece to sing... a lot of us were in tears by the end of it"

Singer ticket with loan of vocal score on the day

The workshop fee includes free loan of all vocal scores.

After the workshop, we'll be giving a formal concert performance of Requiem at 6:30pm. Please bring suitable concert attire. 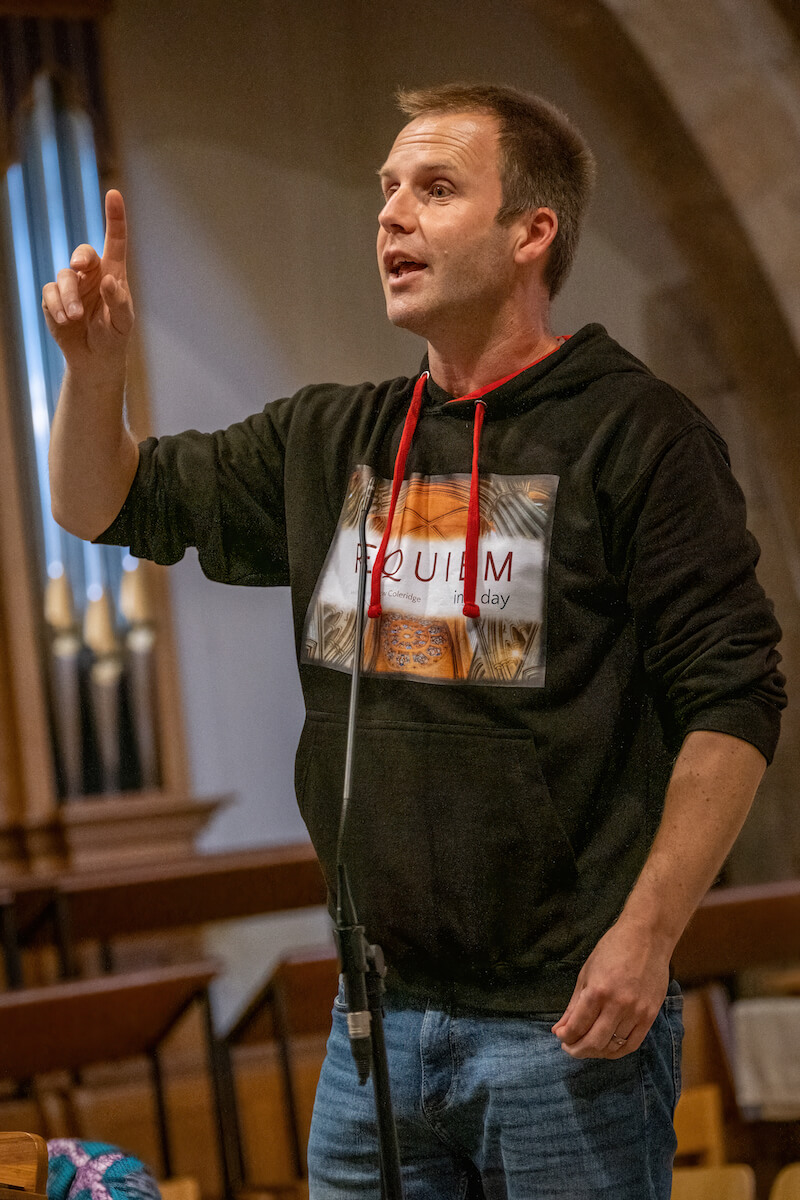 Composer and conductor Matthew Coleridge (b.1980) is an exciting voice in the British choral music scene. His first choral composition - the Corpus Christi Carol - was recorded by a cappella group The Queen's Six, appearing on the cover CD of BBC Music Magazine's Christmas edition in 2015.

Requiem (composed 2014-15) was hailed by the late Sir Neville Marriner as "a valuable addition to the 21st century choral repertoire". Is is regularly performed by choirs across the UK, and overseas.

Matthew's 'Requiem in a Day' choral workshops are very popular amongst choral singers, giving them the opportunity to sing this wonderful piece in some of the UK's most prestigious church buildings.

Jonathan Hope is gaining a reputation at home and abroad as one of the most exciting organists of his generation.

Educated at George Abbot School in his hometown of Guildford, he studied initially with Stephen Lacey, John Belcher and David Sanger, and then at the Royal College of Music, London with Margaret Phillips and Sophie-Véronique Cauchefer-Choplin (improvisation).

Jonathan has released three solo recordings and has appeared in numerous others. In 2015 he released his first solo disc, Gloucester Experience (Willowhayne), featuring Reubke’s Sonata on the 94th Psalm. In 2016 he released a DVD, The Grand Organ of Gloucester Cathedral, with Priory (featuring his own transcription of Dukas’ The Sorcerer’s Apprentice). Jonathan's third recording, Redcliffe Experience (Willowhayne), was released in 2019, featuring new works by Neil Cox and Cecilia McDowall, and transcriptions of music by Brahms and Elgar.

George is a cellist from Southwest England. He begun lessons at the age of five with Josef Koos, a Hungarian count who had been Principal of the Bournemouth Symphony Orchestra for 27 years. After a spell in the National Children's Orchestra, George studied at Wells Cathedral School as a Specialist Musician supported by the Department for Education.

After a graduating with a First Class Honours degree in Music from the University of Bristol, George performed the Elgar Cello Concerto with Dorset County Orchestra in Swanage and performed recitals around the world, with highlights including City Hall, Hong Kong, and Seoul Arts Centre, Korea.

He has recently graduated from the Royal Welsh College of Music and Drama with a Masters in Orchestral Performance and is now an extra player with Welsh National Opera.

Soprano Emily Hicks is a familiar face at Matthew’s Requiem in a Day workshops, having previously performed the piece at Portsmouth Cathedral, Dorchester Abbey and Romsey Abbey.

She was a choral scholar at Royal Holloway, singing in the Chapel Choir and Schola Cantorum and recording several CDs, including one as a featured soloist. She currently studies with opera singer Anna Gregory.

Come and sing Requiem in one of Britain's most striking modernist churches, and the amazing acoustics of All Saints, Clifton.

Come and sing Requiem in one of Yorkshire's most spectacular churches, the vast Gothic Revival church of St Wilfrid. With organist Anthony Gray.

Come and sing Matthew Coleridge's Requiem in the wonderful Blackburn Cathedral, home to one of the best acoustics (and pipe organs) in the North!

Come and sing in the stunning Arundel Cathedral, in one of England's most picturesque towns.

This was no ordinary 'come and sing'! A work of exquisite beauty
Music in Portsmouth review, 2020

You are a true tunesmith - well-crafted and inspiring music!
Dr David Price - Master of the Chorister, Portsmouth Cathedral

Beautiful... I find myself entranced by the openness of this music.
Paul Carr - composer

A singular voice - and that is an exceedingly rare thing!
Michael McGlynn - Anúna

Thank you for a wonderful day. You were so encouraging and patient. I can't imagine not singing your Requiem again. I absolutely loved the day!
Monica Kent - Louth workshop 2019

We were enthralled by the pure beauty of your Requiem. Parts of it were quite exquisite and we loved the fact that you, the composer, were directing us with such skill and clarity of conducting. Thank you so very much for a phenomenal day
Jeanne Apsland - Buckfast Abbey workshop 2019